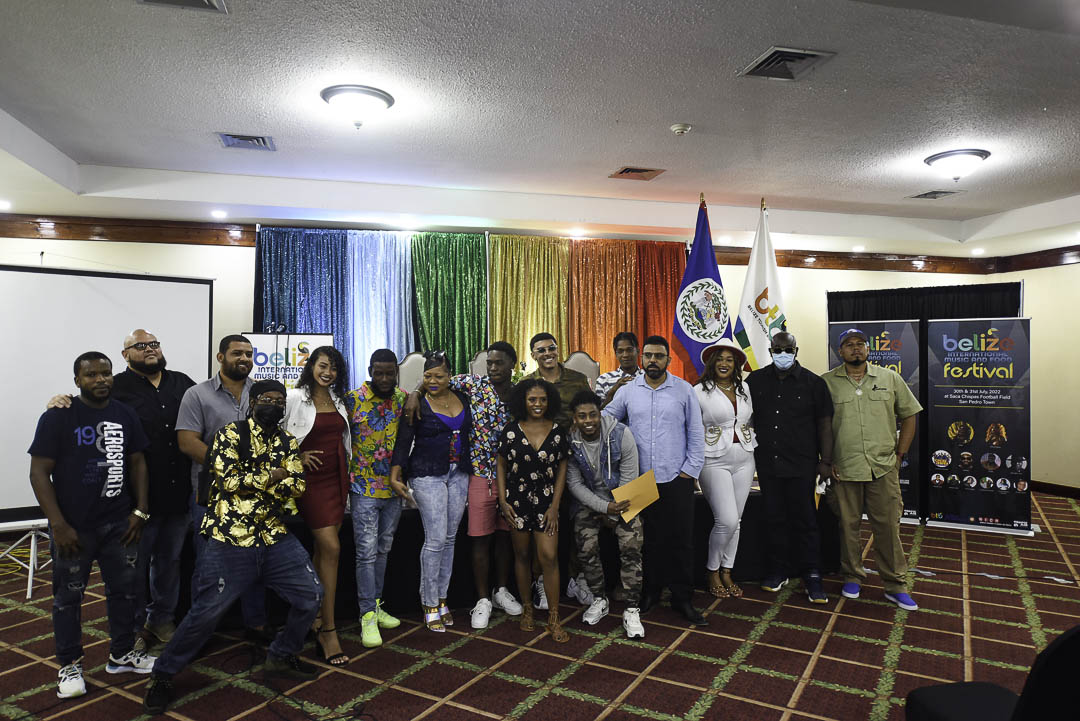 BTB LAUNCHES THE FIRST BELIZE INTERNATIONAL MUSIC AND FOOD FESTIVAL
Belize City, Belize, May 23, 2022: The Belize Tourism Board (BTB) today unveiled plans for a two-day international music and food festival, which aims to showcase local and international musical artists as well as Belize’s exceptional cuisine. The launch took place this morning at the Biltmore Plaza Hotel in Belize City and was attended by key players in the music industry, including well-known local artists and DJs.
The first of its kind, the Belize International Music and Food Festival will be held from July 30-31, 2022 at the Saca Chispas Field in San Pedro, Ambergris Caye. The launch was strategically designed to create awareness of the Festival and build momentum leading to the event.
The Festival will feature different Belizean and International music genres ranging from Reggae, Afro-Beats, Dancehall, Soca, Punta, and Latin beats and will include performances of 10 international artists, 2 international DJs, and a host of local artists and DJs.  Among the local artists will be Supa G, Ernestine Carballo, TR Shine, Stig da Artist, Flaco Leslie, Yas Thalia,  Denise Castillo, J Cas, Dajah, King Rome, Brithney Starr, Don Doe, Den Z, Papa John, TLC Band, and Centa Stayge Sessions. International performers will include Koffee, Patrice Roberts, Demarco, Timaya, Barrington Levy, Ricardo Drue, Teddyson John, Farmer Nappy, Lil Natty and Thunda, Sonora Dinamita (a Mexican Cumbia group), DJ International Stephen, and DJ Supa Twitch.
The event will be complemented on both days by a diverse culinary landscape, featuring exquisite food and beverage booths from local businesses, providing visitors an opportunity to immerse in Belize’s culture.
During the launch,  the Minister of Tourism and Diaspora Relations, Hon. Anthony Mahler, stated “It is important for us as a country to support our musicians. This music festival will create a platform whereby we can build exposure for our local artists. We are investing in our culture and creativity because we want to create a continuous platform for our artists to excel. We want our music and our Belize brand to be out there.”
The launch ceremony also included remarks by Mr. Evan Tillett, Director of Tourism, Mr. Josue Carballo Director of Industry Development at BTB, and John Marsden from Mars Productions, with a prerecorded video commentary by several international artists.  Belizean artists in attendance signed their contracts with the BTB, solidifying their commitment and support for the Belize International Music and Food Festival.
The Belize International Music and Food Festival are envisioned to set the stage for innovations beyond sound and taste, in a platform to inspire and market Belize and all of its assets.  The objectives of the festival are:
For more information on the first-ever International Music and Food Festival, please contact the BTB at 227-2420 or via email at [email protected]