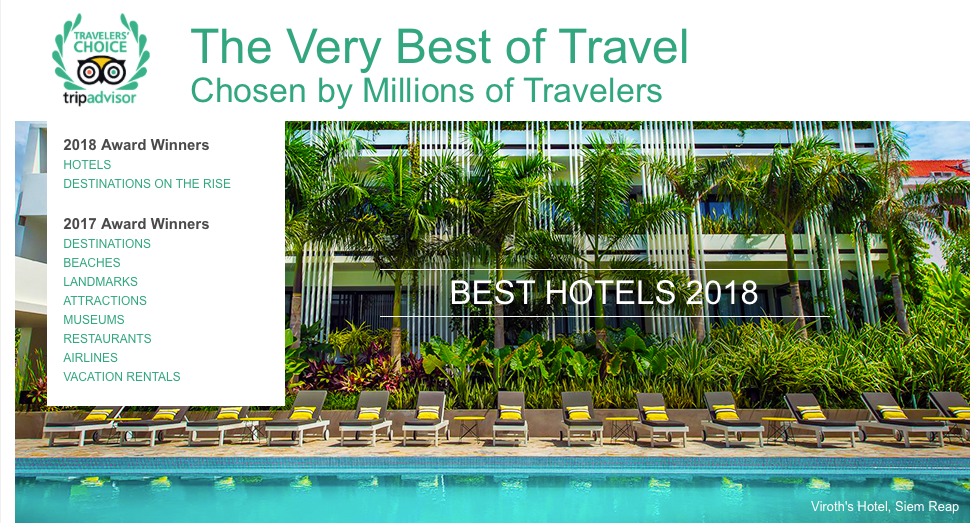 Belize City, Thursday 8th February, 2018: The Belize Tourism Board (BTB) is pleased to announce once more that several Belizean accommodations have been recognized in this year’s TripAdvisor’s 2018 awards list, both at the World and Central American categories.

TripAdvisor is a travel planning and booking site, and its Travelers’ Choice award winners were determined based on the millions of reviews and opinions collected in a single year from TripAdvisor travelers worldwide. In the 16th year of the awards, TripAdvisor has recognized 8,095 properties in 94 countries and eight regions worldwide.

The awards celebrate hotel winners in the categories of Top Hotels Overall, Luxury, Bargain, Small, Best Service, B&Bs and Inns, Romance, Family and All-Inclusive. In addition, a new “Value for Money” hotel award category was created this year. To qualify for this award, a property must have at least four stars and four bubbles on TripAdvisor, and offer annual nightly average rates that are at least 20 percent below the city average and cost less than $300 per night based on hotel prices available on TripAdvisor. The hallmarks of Travelers’ Choice hotels winners are remarkable service, value and quality.

This year Coco Plum Island Resort ranked fourth in the Top 25 Small Hotel, 7th among the Top 25 Hotels for Romance and 9th on the Top 25 Hotels for Best Service in the World Category. Meanwhile, the Phoenix Resort in San Pedro, Ambergris Caye ranked 12th on the top 25 Luxury Hotels in the World Category and placed second on the Top Ten Luxury Hotels in the Central America category. Vanilla Hills Lodge in San Ignacio placed first in the top 25 B & Bs and Inns in Central America.

The BTB is delighted to congratulate all the awardees and reiterates its commitment to work very closely with stakeholders as strategic partners in marketing Belize as a Curious Destination. For further information on the Trip Advisor’s 2018 Awards, please visit THE VERY BEST OF TRAVEL, Chosen by Millions of Travelers at https://www.tripadvisor.com/TravelersChoice

About the Belize Tourism Board

The Belize Tourism Board (BTB) is a statutory body within the Belize Ministry of Tourism and Civil Aviation, and it is governed by a Board of Directors appointed by the Minister of Tourism and Civil Aviation. The BTB works in conjunction with members of the private sector – including the Belize Hotel Association, Belize Tourism Industry Association and Belize National Tour Operators Association – and is dedicated to building tourism in the most economically and environmentally sustainable manner. As a part of its responsibilities, the BTB promotes Belize as a premier tourism destination to both in-country and international consumers. Among its outreach to the international travel market, the BTB markets the country’s unique attractions to travelers, members of the travel trade industry and media outlets in key markets. The BTB is also dedicated to developing and implementing tourism programs that will help strengthen and grow the Belizean tourism industry; promote good destination stewardship; and instil high quality standards for accommodations and travel experiences. For more information on the BTB and its services, visit www.travelbelize.org.